What Is a STEM Degree? 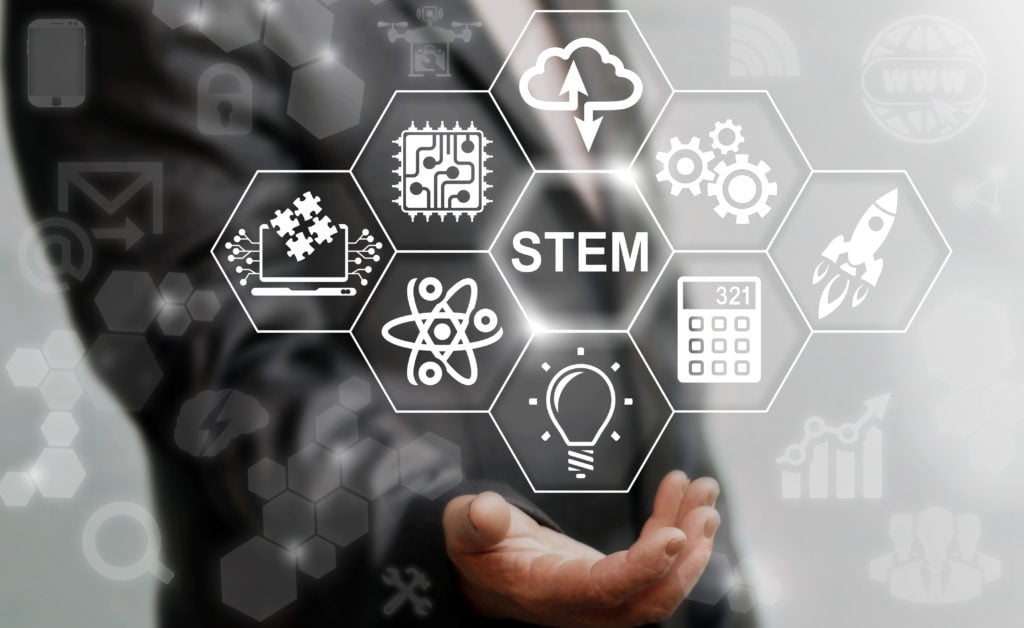 Perhaps as you’ve been researching your options for college degrees, you’ve come across a puzzling buzzword phrase: STEM degree. Are you wondering what, exactly, people mean when they talk about “STEM education,” “STEM careers,” “STEM classes” and “STEM degrees?” Read on for an in-depth discussion of the fascinating STEM acronym.

What the Letters in the STEM Acronym Stand For

The National Science Foundation specifically defines what a STEM education is:

Putting that all together, the acronym is a useful way of referring to the current body of available high-tech and scientific knowledge.

It is also useful to note that a STEM degree can be in either a soft or a hard science. Hard sciences include subjects, like chemistry, astronomy, physics, biology, and geology. The soft sciences are the social sciences, like psychology, anthropology and archaeology, economics, and sociology. Those who are interested in careers in the STEM science fields actually have a number of options to choose from.

Additionally, many of these subjects overlap, meaning the skills from many STEM fields are required in order to do a job. For example, most of these STEM subjects require an in-depth knowledge of mathematics, even for those who don’t go into mathematics as a career. Many technology degrees, like computer science, rely heavily on math, for example. Other subjects, like archaeology and geology, share many related concepts, and a knowledge of sociology or psychology may be useful for someone who pursues a career in economics.

STEM Degree Programs Acknowledged by the US Government

Government employees at as many as 15 federal agencies are involved with STEM education programs. The federal government of the United States typically spends between $2.8 billion and $3.4 billion every year on various aspects of STEM education. The majority of this money is allocated for financial aid to college students, and some of it is also spent on educating elementary and high school students.

Because federal authorities perceive STEM education to be so important, the US government takes an active role in defining which degree programs are considered to be part of a STEM education. The United States has initiated an effort to bring foreign students into the country to take STEM classes. Under the OPT (optical practical training) program, the US government is allowing foreigners to live in the USA and work at STEM jobs during and after their schooling. Foreign STEM students can work in the USA for as long as 2 years after graduation.

Which Are the Best Colleges and Universities That Offer STEM Degrees?

US News maintains a list of the best-ranked universities that confer significant numbers of STEM degrees. Their methodology is weighted in favor of colleges that grant the highest overall percentages in STEM-related majors. They used the US Department of Homeland Security’s list of degree programs for comparison purposes when evaluating the data.

However, for many students, STEM education doesn’t begin in college. It begins in high school. Fortunately for many who’d like to pursue STEM degrees, there are a number of excellent high schools that give would-be STEM majors a leg up long before they begin their college careers.

Newsweek compiled a list of some of the best of them. These STEM-strong high schools include Stanford Online High School, Bronx High School of Science, Maine School of Science and Mathematics, Windsor School, St. Paul’s School, Boston University Academy, and Germantown Friends School to name but a handful.

There are some educational institutions that are making non-specific STEM degree programs available that allow students to take classes in a variety of science, tech, engineering, and math topics. There are also STEM education programs that are specifically designed to educate future teachers who desire to help their students become proficient in mathematics or the sciences.

Many people choose STEM careers because they pay well and offer a degree of career stability that’s often lacking in other fields. Salaries for these jobs can vary. That said, most people who work in STEM fields get paid very well.

US News and World Report offers some examples of the salaries for the best STEM careers. The average software developer earns just over $103,000 per annum. The physician’s assistant garners a salary of almost $109,000 per year. Statisticians earn nearly $88,000 per year.

The average mathematician garners a salary of nearly $102,00 annually. Orthodontists command $208,000 each year. Web developers take in just over $69,000 per year. Psychologists, a STEM worker in the soft sciences, earn almost $101,000 per year. Finally, cartographers take in nearly $65,000 annually.

As this list makes clear, those who study STEM subjects in college go on to earn comfortable salaries in some very rewarding fields. Many people who work in STEM careers wind up working in them their whole lives. Here’s a quick breakdown of job satisfaction for many in STEM jobs, which was created by Payscale.com.

Despite the satisfaction that comes with these jobs, many STEM jobs go unfilled. According to CBS News as recently as 2017, jobs like data scientist, financial advisor, information security analyst, and physical therapist remain difficult to fill. The difficulty in filling these and other STEM jobs has largely to do with a lack of students in these majors compared to other majors.

The ambitious student who wants to make a comfortable living following graduation may want to learn more about the different types of STEM jobs available. A visit with a school guidance counselor may help.

STEAM and STREAM take the STEM concept a few steps further to include disciplines, like arts and reading and writing. This shift occurred when many in the STEM fields realized there weren’t enough students in STEM programs to fill the available jobs. Adding the arts or writing component to STEM studies allows students to approach more creative fields from a STEM vantage point.

For example, the combination of visual art and technology allows students to consider both beauty and functionality in design. Another example would be the aspiring writer who studies computer science, as well as writing in order to become a technical writer. Both of these disciplines allow the student to work in a STEM-related field while still engaging with more creative pursuits.

How Much Do STEM Degrees Cost?

Given the amount of student debt that many students in the US are dealing with, some would-be STEM students rightfully wonder what STEM degrees cost. The answer to this largely depends on where the student gets his or her degree. Many state universities have excellent STEM programs that don’t cost much. Additionally, many big-name schools have a high tuition cost but offer a great deal of financial aid, making earning a degree from that institution more than possible.

That being said, it is estimated that a bachelor’s degree from a four-year state university can run between $45,000 and $60,000. Engineering degrees cost the most, followed by architectural degrees. Additionally, students who go on to graduate school will incur additional costs. However, as has already been pointed out, the cost of these degrees is often balanced out by the salary that the degree holder earns once he or she enters the workforce.

We hope you found this information on the topic of STEM degrees to be enlightening and informative. If you’re thinking of going to college and earning your degree, you really can’t go wrong by majoring in one of the STEM courses of study. A general STEM degree is also a smart choice of majors that will prepare you well for a variety of lucrative career paths.

Additionally, as this post points out, STEM jobs can include jobs in both the hard and soft sciences, and many of the jobs require skills that draw from more than one STEM discipline. This makes the jobs interesting and challenging. Yet despite this, many excellent STEM jobs go unfilled because there aren’t enough qualified people to fill them. People who pursue STEM degrees qualify themselves for these jobs.

Finally, it’s worth mentioning again that many people who work in these fields report feeling satisfied and secure in their jobs. They experience advancement opportunities throughout their work lives, all because they earned a STEM degree.