11 Great Jobs with a Degree in Food Science

Do you love food? Would you like to make a career out of it? Believe it or not, it’s entirely possible! Food Science degree programs teach students about food safety, recipe development, sustainability, and a number of other subjects related to all things food, but you may want to find out what food science degree jobs you can get down the road before declaring your major. Those employed in this field work for various types of employers such as food manufacturers, major television networks, corporations, book publishers, and government agencies. 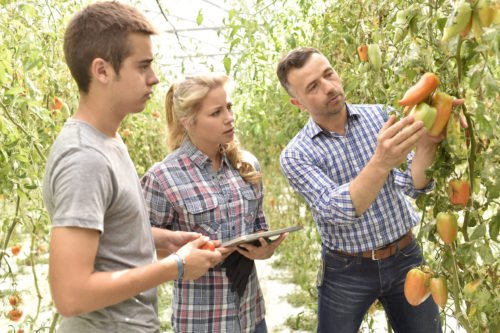 Before we delve into the various career opportunities in the occupational field of food science, let’s take a moment to consider the discipline itself. Food science is an academic field that requires rigorous study in high-level topics like mathematics, chemistry, microbiology, and more. It is not to be confused with culinary arts which focuses more on food preparation. To undertake a degree program in food science, you’ll need to be motivated, disciplined, and committed to your studies. If you think you have what it takes, read on to discover some of the top career paths in this unique and exciting field!

Food science isn’t one of the most well-known occupational fields. In some circles, there’s even the misconception that food science isn’t real science or that food science majors won’t have viable employment opportunities. We’re here to clear the air on this topic. Food science is absolutely a valid career path to choose, especially if you have a passion or natural inclination towards the discipline. The Bureau of Labor Statistics (BLS) reports that job opportunities for agricultural and food scientists are growing at a steady pace due to a growing population that’s in continual need of safe and nutritious food choices. Moreover, positions in food science are associated with earnings well above the national average. Specifically, professionals in the field make almost $73,500 per year on average. Top earners make much more—over $125,000 annually, in fact. Graduates of food science degree programs will find the most lucrative opportunities in food manufacturing, research and development, and government agencies.

Let’s start with one of the more obscure jobs for food scientists. If you like working around animals and care about the health and safety of animals, you might consider putting your degree in food science to work as an animal nutritionist. These professionals work in zoos, veterinary hospitals, and other facilities that house animals in need of care, including regular feedings. These special types of nutritionists must understand the dietary needs of each animal and the types of food that those animals eat in the wild. Animal nutritionists also determine the number of calories that each animal needs depending on their age and size and ensure that those animals receive the best nutritional care possible.

If you’re an animal lover, you’ll be happy to learn that this particular career path within food science is actually quite lucrative. According to PayScale, animal nutritionists make an annual salary of over $75,000 on average.

Some of the jobs with a degree in food science require that you work in restaurants and food packaging facilities. A food and restaurant inspector is someone who inspects food products as well as restaurants and facilities that make or package foods for the general public. As an inspector, you must ensure that workers follow proper food handling and safety standards, that the facility is in good condition, and that people will not get sick from eating certain foods. Restaurant inspectors are also responsible for grading a restaurant based on how well it follows food safety standards. They are also tasked with shutting down restaurants that violate government regulations.

Despite their important work, food and restaurant inspectors don’t earn quite as much as some of the other professionals in food science. Glassdoor reports the average base salary for this occupation to be just over $45,000 per year.

With a degree in food science, you can also work as a product developer in the food industry. Product development is an important and rapidly growing sub-field of the industry today. That’s because food companies do not simply release new products onto the market without first going through several different research stages. Product developers might put different ingredients and dishes together to come up with new frozen dinners or convenience foods that shoppers can quickly put together at home. These developers may work independently or with others, and they often meet with consumers in focus groups and provide employers with information obtained during those meetings.

Food product developers are well-paid for their contributions to food sales. According to PayScale, food scientists who specialize in product development make nearly $68,000 on average.

Some students are drawn to food science programs because they dream of working in jobs with a degree in food science like recipe development. While television chefs and celebrity cooks often come up with their own recipes, they also rely on a team of workers to help them develop recipes for use on their shows and in cookbooks. That means that as a recipe developer, the work that you do behind the scenes might appear on a popular TV show later, or it may be included in a best-selling cookbook. Recipe developers also work for companies that make products like boxed cake mixes and other convenience foods. They create recipes that shoppers can use at home to transform packaged foods into delicious meals and desserts.

The field of recipe development is surprisingly lucrative. Glassdoor reports that professionals working in this field make nearly $75,000 per year on average.

When you think of a research scientist, the food industry might not be the first field that comes to mind. Even so, it is possible to use your degree in food science to work as a research scientist or food science technician. These technicians work with research institutes, farmers, and organizations that want to improve the quality of food. They perform tests on soil samples, research new growing methods, and conduct research into what changes those organizations and individuals should make to yield more and better food production. Though this is one of the more common jobs with a degree in food science you can get, these positions may require working around people or animals and not just ingredients. According to the Bureau of Labor Statistics, food science technicians make more than $41,000 a year.

Salaries for food microbiologists may vary. According to Glassdoor, however, the average base pay for these types of food scientists is just over $64,000 per year.

As the job title implies, food chemists study the chemistry of food. Since a large portion of the food we eat contains living organisms, including both plants and animals, food chemistry encompasses the important sub-field of biochemistry. Through research and testing, food chemists discover and implement new techniques for making food more nutritious, digestible, tastier, and safer to consume. As a food chemist, you may specialize your work in one or more of these areas of food chemistry. Your workplace may vary, too. Food chemists may find employment with food manufacturers, restaurants, research institutes, and even government agencies.

Though you may make considerably more or less depending on your employer, location, and a variety of other factors, PayScale reports the average salary for a food chemist to be just under $56,000 a year.

One of the most exciting fields of study within the discipline of food science is that of food flavoring. A type of food chemist, a food flavorist, or flavor chemist studies the chemical makeup of foods in order to improve their flavor. Flavorists often work within “flavor houses” of food processing and manufacturing companies. Some flavor chemists may also work in industry research facilities, though. While it may seem like a fun and whimsical profession, flavorists often undergo extensive seven-year apprenticeships to become members of the Society of Flavor Chemists before becoming officially employed in the industry.

A with all food science career paths, wages for flavorists can differ depending on your exact terms of employment. Still, PayScale reports the average salary to be more than $61,000.

Another intriguing opportunity in the world of food science is the sub-field of sensory science. Sensory scientists explore how humans interact with food on a sensory level, including taste, touch, sound, appearance, and texture. Their research helps food companies and manufacturers produce food items that are appealing to consumers and all of their senses. Though it is a unique and fun career path, sensory science is a legitimate area of study with real employment opportunities. Sensory scientists usually have a minimum of a bachelor’s degree in food science or a related field. Some hold advanced degrees or professional certificates such as the Applied Sensory and Consumer Science certificate available from the University of California- Davis, for example.

Sensory scientists are some of the higher-paid types of food scientists. PayScale reports the average earnings for this occupation to be just over $82,000 annually.

You may think of food science and engineering as very different fields of study. The occupation of a food engineer marries these two disciplines, however. Food engineers create systems for effectively and efficiently handling food and food products. They work within every step of the process for harvesting and delivering food to consumers, from producing food products to storage and packaging food safely prior to distribution. Food engineers usually work for private food companies and manufacturers, but some may find work with government agencies and non-profits as well.

Like other types of engineers, food engineers are well-compensated for their work. According to PayScale, these types of food science professionals make an average salary of over $77,000.

Though not a food science occupation exactly, the role of a food marketer is a closely related position that students may consider, especially if they’re interested in the business side of food. Food marketers are hired by private food companies to help advertise and promote their food products. These professionals create complex marketing campaigns for food brands that may include product packaging, television commercials, online advertisements, social media campaigns and more. Their primary role is to convince consumers to purchase certain food products when they go to the grocery store or fast-food restaurants, for example.

A food marketer’s salary can vary significantly depending on where they live and work as well as other factors like educational background and training, for instance. PayScale reports that graduates of Bachelor of Business Administration programs with a specialty in Food Marketing earn almost $80,000 per year on average.

With one of these great jobs in food science, you can work for a non-profit organization, a conglomeration of farmers, television networks, government agencies, or a host of other employers. Before choosing a minor or a concentration in college, it’s a good idea to look into some of the common (and not-so-common) types of jobs with a degree in food science to decide exactly what you should study.