What Is a Good GPA in High School?

Contents
Featured Programs
What Is a Good GPA?
What Is the National Average GPA in the USA?
How Admissions Counselors Standardize High School Grade Point Averages
What’s a Good GPA if You’re Seeking Admission to a Selective Academic Institution?
What is a Good GPA for the Ivy League?
What is a Good GPA for an American Public Ivy?
Class Rank and School Reputation May Impact the Quality of a Student’s GPA
Good GPAs for College Admissions Have Changed
Increasing a Low GPA with Good Grades
Importance of a Rigorous Curriculum Versus a High GPA
Converting a 5.0 GPA Scale to a 4.0 GPA Scale
Do Open Admissions Mean No GPA Requirement? 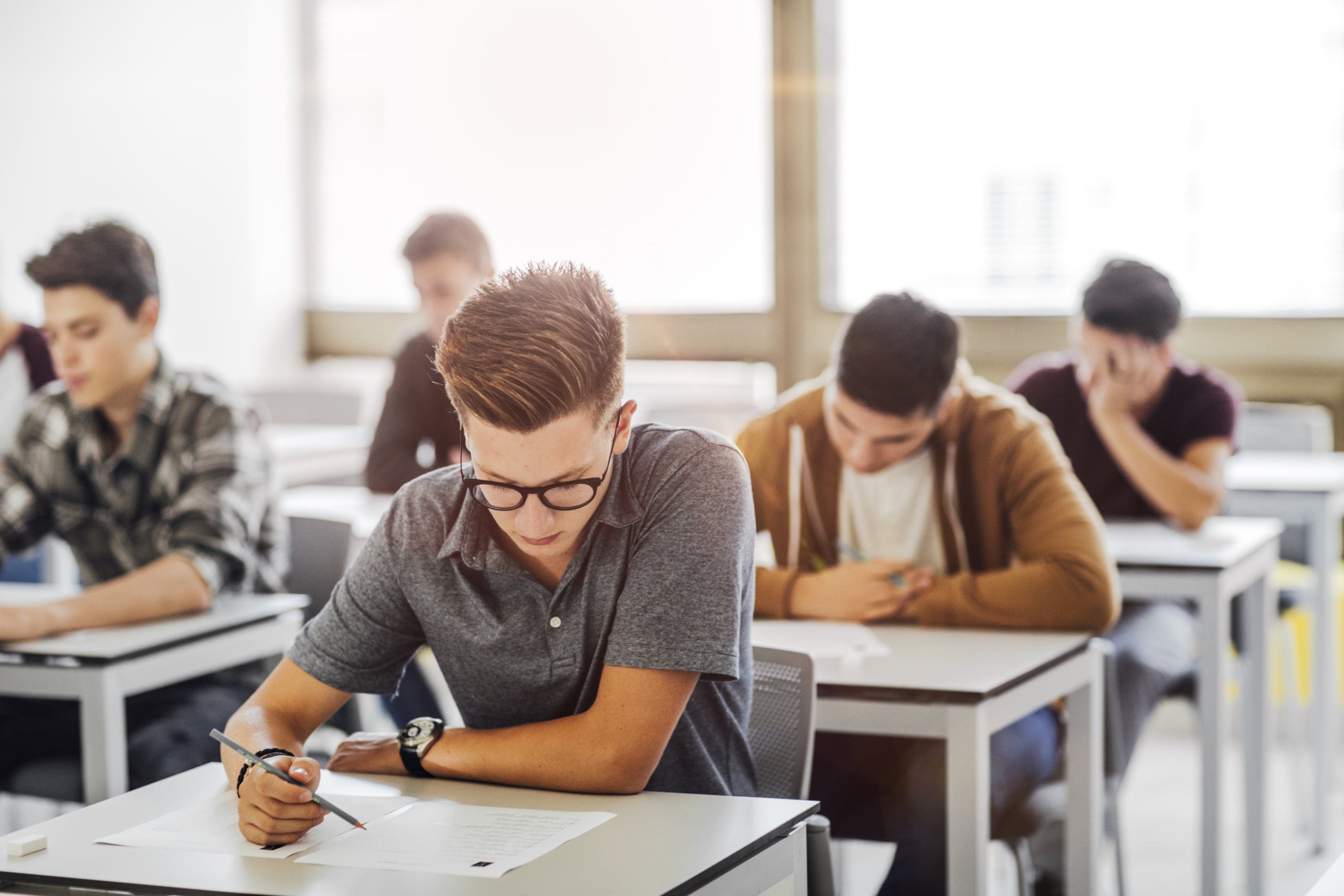 When selecting a college, students usually look for an institution with impressive degree programs or a good reputation. However, college applicants must also determine what is a good GPA for their chosen college or university as well as what is a bad GPA. In most cases, a high GPA is somewhere between 3.50 and 4.00, and a low GPA is somewhere between 1.50 and 2.00. Understanding what constitutes a good grade point average (GPA) is important. In fact, it may help an applicant figure out whether he or she has a realistic chance of getting accepted to a particular college or university.

What Is a Good GPA?

The answer to the question of a good college GPA will differ depending on your unique situation. Many different factors can influence the answer, including:

What Is the National Average GPA in the USA?

US News gives us some interesting statistics on typical high school grade point averages. The average GPA for female students in high school is 3.10, while the average male student’s GPA is 2.90. These statistics on grade point averages give you a realistic benchmark for evaluating your own GPA, but think of this as a starting point. There are additional considerations you will want to keep in mind such as the issue of weighted or unweighted GPA. If your school uses weighted GPAs, comparing your weighted GPA against these benchmarks can give you the wrong impression about where you stand.

The concept of weighted GPAs can make it challenging to compare some students’ work against the national average. This is because the rating scales are different. To compare a weighted GPA against the average and find out whether you have a good GPA, it’s necessary to understand how your chosen school computes high school grade point averages.

The National Center for Education Statistics and some academic institutions use Carnegie units to create a standardized system to calculate grade point average. This system is based on classes featuring 120 hours of classroom instruction. To compute the number of Carnegie units you’ve taken, you’ll need to have access to both your grades and the number of course credits for each class. The NCES published an article called “How is grade point average calculated?” that has more information you may find helpful on this topic.

What’s a Good GPA if You’re Seeking Admission to a Selective Academic Institution?

If you want to attend an Ivy League school, you’ll want your cumulative GPA to be as close to 4.0 as possible. If your high school uses a weighted system that includes additional credits for more challenging course material such as advanced placement or IB classes, the you’ll want your GPA to be over 4.0.

A perfect 4.0 GPA is not essential for admittance to these prestigious schools. Your odds of getting into to a highly selective school are still quite good if your GPA is above 3.7. While it is possible to attend a selective school if your GPA is below 3.7, you’ll have to show impressive results to college admissions officers in other areas of your application.

Essentially, the definition of a good GPA varies by circumstance and isn’t the same for everyone.

What is a Good GPA for the Ivy League?

The United States is home to eight universities known collectively as the Ivy League. These competitive universities were some of the first institutions of higher learning in North America. Several were founded before the signing of the Declaration of Independence and the United States Constitution.

The Ivy League schools are Harvard, Princeton, Dartmouth, Brown, Yale, Columbia, Cornell, and the University of Pennsylvania. These universities have some of the largest endowments of any educational facilities in the world, and their cumulative GPA expectations are just as impressive. For example, the average GPA for a student admitted to Harvard University is actually above 4.00, which is particularly impressive since most high schools operate on a GPA scale that only goes to 4.00.

A GPA higher than 4.00 represents superior academic performance. It means that a student has participated in advanced classes in high school such as Advanced Placement (AP classes) or honors classes and may have also submitted extra credit projects. High school students interested in attending competitive colleges like Harvard or any of the Ivy League schools will need to score solid grades in rigorous classes to achieve a GPA at the very top of the traditional 4.00 scale.

What is a Good GPA for an American Public Ivy?

The average GPA for students who are accepted to the College of William and Mary is 4.24. This is actually higher than Harvard University, which shows an average high school GPA of 4.18 for incoming freshmen. Achieving a 4.00 or higher GPA in high school usually means receiving A’s in virtually every class and also taking challenging classes that hold more weight.

In most cases, a 4.00 GPA is considered to be excellent. However, the number of students from a student’s high school who also have 4.00 GPAs may affect whether that score is considered good or average. GPAs of 3.5 from high schools with a reputation for difficult classes and rigorous teaching standards may indicate better preparation for college than a 4.0 GPA at a school where a significant portion of the graduating class has the highest GPA.

Most students who apply to college are only aware of what their chosen college requires for a minimum GPA. However, it may surprise 21st century students to learn that average GPAs have increased significantly over the last several decades. GPAs published by ZDNet suggest that the average high school GPA in the 1950s was 2.52, but by the 1990s, the average GPA was up to 3.11.

The study referenced by ZDNet revealed that average GPAs for public and private schools rose in tandem for several decades, but average GPAs at private schools started outpacing public schools by the end of the 20th century. As of the early 1990s, the average GPA for students at all schools across the country was 2.93. That average had increased to 3.11 by the mid-2000s.

What do these averages tell the college student of tomorrow? In the next few decades, college applicants may see average GPAs as well as GPA requirements continue to increase. Other factors for college admissions requirements, including specific classes, test scores, volunteer work, and extracurricular activities may also continue to become increasingly important. Essentially, it may require a more difficult course load and better grades in the future in order for students to begin their college career with a good GPA.

Students who have future dreams of attending college but who have low GPAs have some options available for increasing their grade point averages before their final grades are issued. One route students may take is to enroll in easier classes. An A grade in these basic courses will increase the student’s overall GPA prior to college admissions.

However, this “good grades” method isn’t always the answer. Grade inflation may help one student who has a GPA that is only slightly lower than the requirement for his or her chosen school, but it may backfire if the student takes too many easy classes. Substituting a few easy classes may help a student increase his or her GPA to 3.00 from 2.99.

However, substituting a whole slate of challenging courses for easy classes may make it more difficult to gain college acceptance, particularly if the school has a strict acceptance policy. It’s also important that students make sure they take all of the classes required of their future college. A student shouldn’t take an easy physical education class in place of a math class if that math class is required by the student’s college of choice, for example. At the end of the day, it may be more advantageous for students to develop better study habits to achieve good grades in more difficult classes.

Importance of a Rigorous Curriculum Versus a High GPA

An impressive high school GPA when a majority of the student’s classes are easy isn’t nearly as impressive as a slightly lower GPA that comes from a schedule packed with honors and Advanced Placement courses. Moreover, a student with a GPA that’s slightly below average may still receive a college acceptance letter in the mail if he or she takes difficult and demanding high school courses.

A school guidance counselor may be one of the best allies a student has in choosing an appropriate high school curriculum. It may benefit a high school student to speak with his or her counselor to determine what type of classes might be necessary to get into to a particular school. When deciding whether to accept students, admissions officers at a particular college may place a greater emphasis on a rigorous curriculum than an ultra-high GPA.

Many high schools operate with a GPA calculation that tops out at 4.00, and most schools list their application requirements on numbers based on that same scale. However, some schools grade their students on a GPA scale that reaches 5.0, and other schools only give out letter grades on report cards. Fortunately, it’s possible to determine if a non-traditional GPA is equivalent to a traditional high school GPA by performing some simple calculations.

Students with questions about converting their GPAs can usually speak with a guidance counselor or other academic advisor for assistance with the calculation. Many college applications will require that the student submits their GPA on a 4.0 scale, so it’s usually a good idea to perform the calculation before starting the application process online. Still, admissions officers may also be able to help in some cases, and students can consider using a GPA conversion table.

For some schools, open-admission means that anyone who meets the minimum application requirements will receive a letter of acceptance. Those requirements may include a minimum GPA. It’s important that students who are interested in a school that has an open admissions policy don’t assume that they can perform poorly in their classes and still gain acceptance to the school of their choice.

Despite your college major, getting into an excellent college with a renowned reputation usually means graduating high school with a good GPA and high test scores. Anyone interested in getting into a university like Harvard should strive for a perfect GPA of 4.00 or above. Still, an impressive high school GPA isn’t the only admissions factor taken into consideration by the nation’s best schools. Extracurricular activities, the rigor of a student’s curriculum, standardized test scores, and other application materials can also make the difference in receiving a letter of acceptance or denial–good GPA or not.