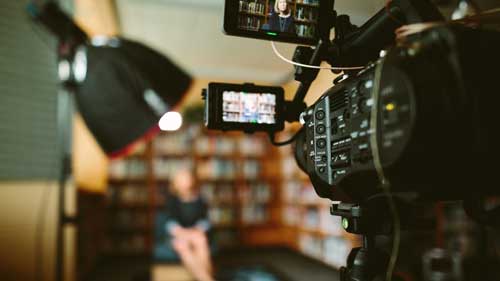 Film studies degree programs provide students with the knowledge and practical skills necessary for a broad range of job opportunities in the creative industry. Whether students would like to obtain positions with television, movie, or video companies, there is sure to be a fun and exciting career that will satisfy their occupational goals. The five careers described below can all be obtained with a degree in film studies and are among some of the most popular careers for film studies majors today.

Graduates of film studies degree programs who have excellent organizational skills may want to consider careers as TV or film producers. These professionals are responsible for overseeing most all aspects associated with the production of movies or television shows and programs. Just a sample of their daily duties include securing financing for projects, maintaining budgets, creating production plans, and hiring such staff members as directors, screenwriters, and cinematographers. Producers work in a variety of settings including TV or film studios, remote locations, and offices.

For graduates of film studies programs who are looking for entry-level positions in the creative industry, one great option is to become a production assistant. The tasks of production assistants vary greatly depending on the needs of a particular production as well as the PA’s experience and skills in their chosen field. Some examples of the tasks they may be asked to perform include copying and distributing scripts to actors, shuttling crew members to remote locations, helping construct sets, maintaining wardrobes, helping create props, and performing light office work.

A degree in film studies can also open the doors to positions as TV and film directors. Directors are somewhat similar to producers, but while producers’ responsibilities are more action-oriented, the responsibilities of directors are more vision-oriented. TV and film directors ensure that productions run smoothly by casting the best persons for available parts, ensuring cameras are at proper angles, helping actors interpret scripts, and making sure that special effects are appropriate to the production. These positions are growing at a rate of about 12 percent according to the United States Department of Labor.

Another career option for graduates of film studies degree programs is that of a television broadcaster. These positions are highly flexible, and graduates who choose this path can obtain positions as news anchors, news analysts, reporters, or correspondents. These persons typically work under strict deadlines and must have excellent researching skills. Common duties of television broadcasters may include gathering information for news stories, writing and editing news stories, and delivering news stories in an objective manner.

Becoming an art director is yet another terrific career for graduates with film studies degrees. Directors of art in film or TV supervise the artistic aspects associated with the production of movies, TV programs, and videos. This typically entails such things as planning sets and props, overseeing the creation of sets and props, preparing budgets for artistic designing and creation, helping plan and design special effects, and ensuring that wardrobe and makeup coincides with each unique production. Persons who choose this path must be highly creative and have at least basic skills in such areas as carpentry, painting, and drawing.

The creative industry offers many fantastic career opportunities to film studies majors. From working as TV and film directors or producers to working as art directors or TV broadcasters, graduates of film studies degree programs have many exciting options available to them.