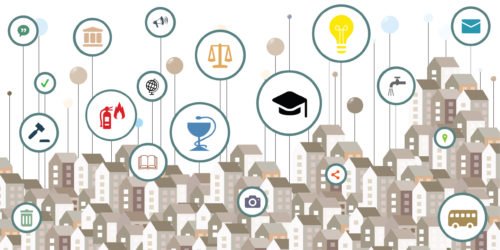 In America the two-party system has traditionally meant that Republicans want more state or locally-centered government and fewer programs while the Democratic Party favors more centralized government. Public program administrators must change policies to react to the positions of the party in power. The recent economic downturn plays a part in the shift between philosophies too because politicians are skittish about funding certain kinds of programs. The trend has been toward downsizing and administrators have to figure out how to do the same work with fewer employees. Work morale suffers when raises are capped and hiring freezes as well as restructuring threaten jobs.

Responding to a demand for more frugality in programs, administrators have turned to private contractors. That change has had the opposite effect in many cases. Services that are part of the governance tend to be more responsible toward its policies and limitations. Private contractors have tended to “play by other rules.” This has resulted in a number of scandals like the Blackwater issues in Iraq and, more recently, abuses in the privatization of prisons and with the debacle of the Veteran’s Administration. In the latter, contracting has resulted in budget over-runs and in outrageous charges for things like toilets. Still, the theory that competition may spur some more efficient use of resources may prove true in some instances. The challenge seems to be in deciding which things to privatize.

The website Unpan.org cites this as a major game changer for Public Administration. Even if public services did not want to implement technology, they would have no choice. Every other sector has turned to data-oriented operations and public service and non-profits must as well in order to interface with them. The issue is with organizational and personal security. In order to maintain a secure database someone must have the expertise to administer the computer programs and that demands additional and more specialized personnel.

The challenge presented by this issue is to make public organizations representative of the social and cultural environment in which they exist. In simpler terms, public housing organizations in minority areas must include a proportionate number of minority members in the administration. That not only applies to racial issues, but to gender and to sexual orientation. However, organizations founded in this manner may encounter conflicts between members and cultural groups. In each case, while recognizing the rights of the majority, organizations must protect minorities.

Hillary Clinton said in a debate that politicians must have a personal and a public opinion. That is, there are times when administrators of public programs act contrary to their own convictions for the good of the organization. There are also times when organizations are not forthcoming about some actions because programs deemed necessary would not be well received or understood by the public that is funding the organization. The trend toward transparency means that administrators must walk a thin line between full public disclosure and having some clandestine policies. This transparency also affects other issues like the contracting problems and the inclusion of minorities in appropriate numbers.

Of course there are other issues to be dealt with, but these are representative of the difficulties governments face in implementing civil programs for the benefit of the public. The face of Public Administration must always change to mirror the government and culture that houses it.