20 Most Impressive Historic College Campuses in the U.S. 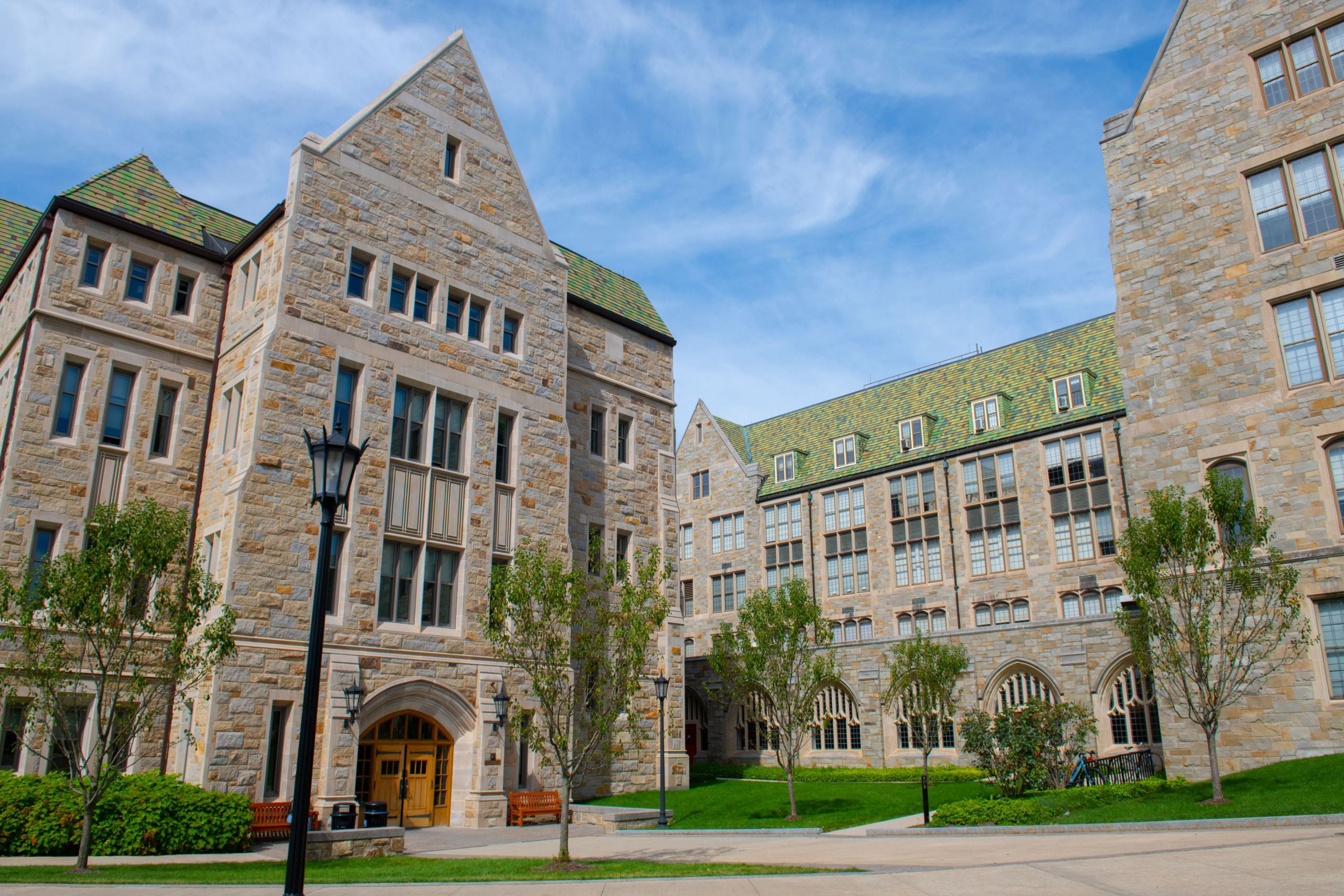 History buffs are in their element when surrounded by the mystique and intrigue of a great historic site. Who frequented this spot? What were their names? What was their business?

And U.S. history buffs can’t do better than to study at a college boasting National Historic Register sites. But let’s be honest. Some historic areas are more impressive than others — more beautiful, well-kept, and inspiring to the spirit. So for our ranking, we took the extra step to find you the schools with multiple historic sites that also prided themselves in a remarkable campus aesthetic experience.

Our initial pool of 50 colleges had to have at least three historic buildings, landmarks, or historic districts according to the National Register of Historic Places Listings at Colleges and Universities in the United States on Wikipedia. From there we narrowed the pool down to 20 finalists based on the 10 criteria below. In the case of a tie, the school with a greater number of these criteria was ranked higher, with a rare further tie being broken by the school judged to be of greater historical intrigue.

Interestingly, beautiful historic campuses were found in all regions of the country. Our finalists include large public universities as well as small liberal arts colleges, from the Midwest to the deep South, and from New England to the Pacific coast. Campus images reflect both beautiful historical structures and natural surroundings.

Yale’s largely Collegiate Gothic campus includes several beautiful 19th-century mansions along Hillhouse Avenue. Charles Dickens called this row “the most beautiful street in America.” Of special interest for sports enthusiasts is the Yale Bowl (1913), named a National Historic Landmark as the first bowl stadium in the United States, and boasting a capacity of 61,446.

The Eugene campus of the University of Oregon is itself an arboretum with over 3,000 trees of 500 different species. Located along the Willamette River, the campus is nestled between the Cascade Mountains and the Pacific Ocean. The University’s first building, Deady Hall (1893), is one of the several National Historic Places on the tobacco-free campus.

Many historical buildings and a national historical landmark are found atop Cornell’s East Hill amidst the varied terrain of the Finger Lakes region of New York. The beauty of glacial Cayuga Lake inspires faculty and students, its deep waters being used to air-condition campus buildings. Though officially discouraged, two gorges provide excellent swimming holes, while the 2,800-acre Cornell Plantations offers the Cornell community an arboretum, botanical gardens, ponds, and walking trails.

At this top-ranking and highly selective liberal arts college founded in 1866, Carleton’s 2,000 students enjoy their hilltop setting and arboretum overlooking the Cannon River. Students call the center of this hill the “Bald Spot” – an ice rink in winter and an ultimate frisbee field in summer. One of Carleton’s several historic sites is the Goodsell Observatory. It was built in 1877 as the largest observatory in the state of Minnesota.

The Western Kentucky University campus offers a commanding view of the Barren River Valley from its vantage point on the hill known as College Heights. The campus then continues down the north, south, and west sides. New Deal-funded Cherry Hall, serving as the center and icon of the University, is recognized by the National Register of Historic Places. A historic heating plant, completed in 1927 and still in use, is also on the Register.

The motto of Hampden-Sydney, an all-male college founded in 1776, is Come here as boys so you may leave as men. A distinctly colonial feel dominates the campus, unified architecturally by the Federal-style motif. A Civil War skirmish was one of only five times that classes have been interrupted since 1776. The College has two buildings on the National Register of Historic Places as well as a U.S. Historic District.

Founded in 1824 Rensselaer is known as a technological research university with a long tradition of scientific excellence. Sitting on a hill in the Upstate New York town of Troy and overlooking the Hudson River, much of the campus architecture is unified by the Colonial Revival motif. Among its buildings are nationally registered historical places built to be devoted to scientific progress.

While one might not normally think of a large public research university as having a beautiful and historic campus, UW Madison is undoubtedly among the best by virtue of its natural setting, flora, and historical sites. Located between Lakes Mendota and Monona, UW Madison has an impressive number of buildings that are National Historic Landmarks. The school also claims the most archeological sites of any American university, with four distinct areas where effigy mounds are clearly identifiable. Nature lovers can learn about native ecosystems at the UW Madison Arboretum.

Founded in 1836 as a private research university, Emory offers an exceptional site heavily forested with pine, maple, oak, and magnolia trees and a creek running through campus. A Spanish tile motif unifies many campus structures, and the Carlos Museum boasts the largest collection of ancient artifacts in the Southeastern United States. Emory’s original campus core, now the site of Oxford College of Emory University, contains a historic district recognized by the National Register of Historic Places.

The unique architectural style of the University of Oklahoma’s buildings has been called Cherokee Gothic, an offshoot of Collegiate Gothic informed by the Native American influences at play since the institution’s founding in Oklahoma territory in 1890. The Bizzell Library, a National Historic Landmark, was built in 1929 in this style and sits at the heart of the campus. Stately trees, landscaped gardens, and statues and sculptures arranged around campus ovals are the pride of the University community.

Princeton’s picturesque setting between Philadelphia and New York City is highlighted by its predominantly Collegiate Gothic architecture. The stunning Princeton University Chapel is the crown jewel. Generous green spaces create a sprawling ivy-league feel. The oldest building on campus, Nassau Hall (1756), was at one time home of the New Jersey legislature, as well as the sight of British capitulation to the American troops after the Battle of Princeton.

Founder Thomas Jefferson wanted the University built around the Rotunda, now a National Historic Landmark, instead of the campus chapel, as was typical at that time (1819). The entire campus core, called the Academical Village, was designed around a series of green spaces, of which the Lawn is the largest and best-known. Opposite the Rotunda, the southern end of the Lawn was designed to extend to the fields of the south without the obstruction of buildings, symbolizing Jefferson’s vision of an agrarian-based society. The beauty of Jefferson’s design has since served as a model for many other university campuses.

On the east side of the Salt Lake Valley, in view of the Wasatch Mountain Range, lies Utah’s flagship educational institution, the University of Utah. The varied terrain of the 1,534-acre campus calls for a division into upper and lower sections, where students enjoy the abundant sunshine and dry air of the region. One of the University’s National Historic Places is Fort Douglas (1862), which protected the Central Overland Route’s mail and telegraph routes when Federal troops withdrew to fight in the Civil War.

The University of Arizona campus is itself an arboretum, including hundreds of olive trees and the Crutch Cactus Garden. Visitors strolling down the spacious sun-drenched Mall notice the red-brick motif that unifies structures across the 380-acre campus. Old Main, completed in 1891, is one of the oldest educational buildings in the western United States.

Founded in 1871 on a hilltop farm overlooking the Ozark mountains, the University of Arkansas boasts 11buildings on the National Register of Historic Places. Of these, Old Main (1875), built in the Second-Empire tradition, serves as the campus centerpiece. Also of historical note is that the University of Arkansas was the first major southern public university to admit an African-American student without litigation (1948). The campus community enjoys the natural area surrounding Old Main, which is an arboretum that contains many of Arkansas’ native trees.

LSU’s 650-acre campus core sits on a plateau along the Mississippi River in Baton Rouge. There the Italian Renaissance style unifies over 250 buildings built in the 1920s with walls of tan stucco and rooftops of red tile. Over 1,200 oak trees grace the campus, along with magnolias and azaleas. Ancient history buffs will want to check out the 5,000-year-old LSU Campus Mounds.

Berkeley students enjoy a number of the best features that nature has to offer in the Bay Area’s temperate Mediterranean climate. The 1,232-acre campus has an 800-acre ecological preserve, the University of California Botanical Garden, and the Recreation Center in Strawberry Canyon. Tree lovers enjoy the many campus trees dating back to the 1870s, including the tallest stand of eucalyptus trees in the world. The campus core boasts a series of national historic places in the Beaux-Arts style.

Founded as an agricultural college in 1888, Utah State has a full range of majors at all levels of study. Situated on a high point above the town of Logan in northern Utah, the campus offers amazing views of Mount Logan and the Bear River Range amidst abundant sunshine. Logan Canyon students have access to ample camping, hiking, and water sports. During WWII, Utah State was one of only six colleges selected as a site of intensive US Navy training of elite students in electrical engineering.