What Is Collective Bargaining?

Important agreements regarding company event involvement, grievance protocol, overtime compensation, health matters, new team member training, scheduling and payroll organization are all core concepts of collective bargaining. As different groups of employees will be protected by the policies of different trade unions, representatives of these unions will typically be tasked with presenting their interests on their behalf. 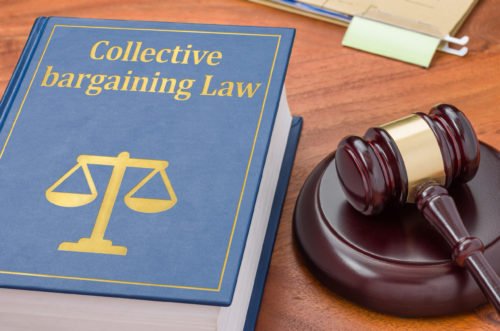 The result of the bargaining process is oftentimes referred to by Union representatives as a Collective Bargaining Agreement (CBA). In addition to the topic of wages, the union will also frequently talk over matters of trade union tasks and the upkeep of proper working conditions as well.

While the United States bargaining model generally uses management representation, certain European countries will typically have employers’ organization management. When all is said and done, the agreement that the employers and representatives reach will stand as a formal standing contract held under the understanding that its terms will be complied with under any and all circumstances.

Bargaining has been internationally advocated for by a number of human rights conventions around the world. In the Facilities Subsector Bargaining Association v. British Columbia, the Supreme Court of Canada addressed the underlying logic of workplace bargaining as the upholding of basic human rights. The Court observed bargaining for the establishment of law in the workplace as an ethical measure of assuring that employees can have some form of voice and autonomy in a form that controls a major part of their lives.

Both the Freedom of Association and Protection of the Right to Organize Convention and the International Labor Organization recognized the right of employees to unionize as being something indispensable to any company that aims to provide is employees with their basic ethical rights.

It wasn’t until the mid 1930s employers were no longer legally allowed to deny an employee the right to unionize; specifically, this occurred with the National Labor Relations Act of 1935. Despite the establishment of the National Labor Relations Act, the concept of Public-sector government employee unionization was met with a fair bit of resistance for about two subsequent decades. At the turn of the 60s, President John F. Kennedy extended the relatively new unionization rights of government employees to federal employees as well.

Empirical studies comparing the welfare of employees protected by a CBA and those unprotected by bargaining arrangements showed that the former generally receive a wage markup of anywhere between 5 to 10 percent higher. While the detractors to unionization have commonly argued that bargaining could lead to welfare loss, it’s been found that the GDP loss is generally no more than 0.2 to 0.5 percent. Overall, the empirical findings have shown that the CBA will generally serve as a way to equalize the distribution of income between unskilled and skilled workers.

Overall, the need for collective bargaining stems from the need to accurately regulate each team member’s working salary, job satisfaction, and fair treatment. Employees and employers can engage in organized negotiation for the most democratic workplace possible.