Anyone interested in human history, culture and biology may wonder, “What is anthropology?” Anthropology is the study of human culture, history, and evolution. It examines how people live around the world, how they react to their environment and how they behave, interact and socialize. 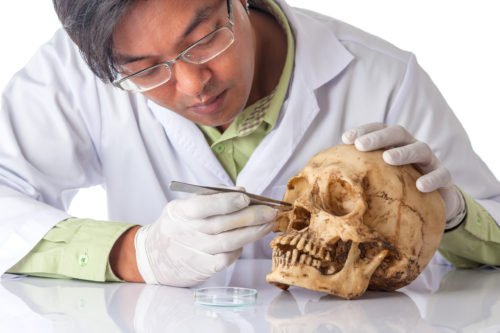 One part of anthropology is the study of the biological features of humans. This includes human physiology and anatomy. It also includes evolution and changes in how humans look based on where in the world they are from. An example of the anthropological study of human biological features would be the development of skin with less melanin. As humans left Africa and settled into places with less sunlight, anthropologists believe that the body needed less melanin in order to absorb more sunlight and produce enough vitamin D. Nutritional history also plays a role in this area of study. Anthropology also involves comparing human morphological features to those of other living primates and extinct human ancestors that bridge the path between chimpanzee ancestors and human ancestors.

Another part of anthropology examines the social aspects of human history. This includes the development of means of communication. Anthropologists may study ancient human art and the creative or artistic expression on everyday items, such as pottery or tools. It also includes the development of human language. The development of politics, family life, religion, cuisine, hobbies, leisure and specialties of work are also included in the study of human social history. For example, an anthropologist might specialize in the study of family life across human history and how family roles for different members vary versus how they are similar in different populations around the world.

Anthropology also includes investigating the processes that define human life. Some of those processes include forming partnerships for parenting and teaching the group’s history to younger members. Other processes that define the human experience include telling stories and teaching a type of work. For example, human parents teach their children how to behave in different situations. Over the course of history, younger members of a group have observed and worked with their family members in order to learn how to do essential tasks such as making a fire, hunting animals, collecting safe food to eat and making clothing and shoes to wear. Anthropologists may also explore other defining experiences, including dramatic rituals and ceremonies that are performed rarely but are highly meaningful.

According to Discover Anthropology, another aspect of anthropology is the exploration of cultural differences as well as the study of universal human experiences. Anthropologists may try to examine whether there are experiences that transcend cultures and time. For example, the grieving process of a mother when her child dies could be a universal experience, but the processes, rituals, and ceremonies of grief could differ across cultures.

Anthropology is a field of study that intersects science, sociology, history, and psychology. A person who has a wide range of interests that includes these topics may want to consider studying for a degree in anthropology. Knowing the answer to the question of, “What is anthropology?” could allow a student to make an informed decision about their area of study and future career path.