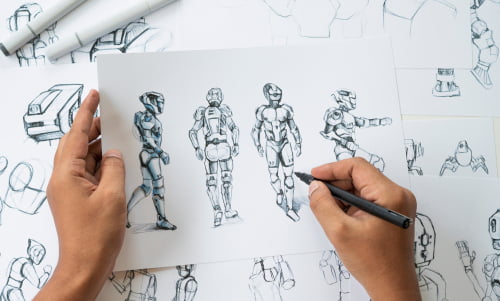 If you are interested in animation and want to make a career out of it, then it is important to learn about the different types of animation. The history of the animation process shows how this art form holds the audience’s attention and easily transforms complex concepts in a digestible format. Marketers, educators, and businesses use animation to create memorable content that easily explains and tells stories. Popular ones are GIFs, video marketing or infographics, cartoons, different kinds of animation used as educational content, and, of course, animation methods for movies. In this article, we have listed ten different styles of animation for you to explore. While students may have to take some foundational courses, a look at the types of animation methods may help you understand which field you want to choose for specialization.

Traditional animation involves using pencil and paper by animators to draw each frame by hand, one at a time. Emil Reynaud was first to show the approach in 1877 when he used an apparatus to demonstrate moving drawings. Also called 2D animation, it was the basic animation technique until computer animation was invented. The uniqueness of this method is that images have only two dimensions – height and width. After drawing a series of images, animators play them fast in a sequence to create a motion illusion.

They create numerous drawings in this process, then feed them into plastic cells, hand paint them, and create an animated sequence on a painted background image. It is a time-consuming process, but there are special programs available now that can simplify the task. Traditional animation provides the foundation for the development of all other animation types, some of which we will talk about in this article.

Traditional types of animation is how it all started and it forms the very basis of all animation styles. Most on-campus or online animation programs include classical 2D animation in the coursework to provide that solid foundation for students.

Motion graphics or motion design involve adding an illusion of motion to various graphics. Also known as mographics, it first appeared in 1960 and has continued to grow in popularity. It is one of the widely used animation methods for video and content marketing. Animators use this technique to add life or motion to any kind of graphics, text, shapes, or typography.

By doing so, they can explain complex concepts quickly and in an interesting manner. It is now a universal technique that is used for many marketing tasks. We can find the use of motion graphics in commercial advertising, movie and game screensavers, explainers,  and promotional videos, brand, and storytelling videos. It is one of the most expansive and hi-tech types of animation that allows for more creativity and experimentation in animation projects.

3D animation is considered a major breakthrough in the history of animation methods. It first appeared on the scene around 1961. It is synonymous with computer animation since the style occurred after the development of visualization software and computer graphics. The first-ever animated 3D clip appeared in 1972, and the style has improved many times since then with better technology to assist animators. From the first animated hand to creating high-end medical imaging and gaming videos, 3D animation has come a long way. Animation films with three-dimensional animation or 3D use motion to add more life to 2D animation and make them realistic. We can find the use of 3D animation in fields like:

The advanced form of this animation method is now used to create computer-generated imagery (CGI), which we can see in movies like Avatar. Specific traits like skin weight and expressions in animated characters come to life with 3D.

Typography animation is an animation method that can be dated back to 1899 France when the first ad containing moving alphabets was created. Also called kinetic typography or moving text, this style of text animation became very popular after Alfred Hitchcock started using it extensively. It is often used in business presentations and within the concept of explanation video. It is often used to show statistics or other information, thus better engaging and involving the audience. It is a popular method for training employees or for e-learning instead of long and boring lectures. Examples of typography animation include:

This style helps to add an element of storytelling to any GIF, video, and other visuals to make them more attractive. While they seem to be ideal for business needs, they add a diverse flavor to various forms of media and entertainment too.

Stop motion is one of the oldest animation methods that has been used for more than 150 years and still remains popular. In this style, animators take multiple photos by moving objects around in the composition one frame at a time, thus giving this style the name of stop-frame animation. Once they have successfully glued the photos into one track, they create a continuous video clip to capture movement. Basically, it is a simple manipulation of physical objects to create an illusion of movement. It is popular because it can lead to amazing creations without the use of expensive equipment and facilities. Some examples of this style include:

Many modern animation software have features enabled in them that allow animators to integrate stop motion animation with modern solutions to enhance the effects. The result is engaging and impactful animation that helps every project gain more traction than ever.

Now that we know what stop motion animation is, it will be easier to use another form of it – cutout animation. This style originated in the 18th century and is still used as one of a variety of options by animators. They were popular in shadow theaters where characters are created from cardboard, paper, stiff fabrics, or photographs. They were then superimposed on each other to create the effect of movement. Present-day use of this style includes:

In these cases, the paper characters are scanned, and their scanned prototypes are used to create and complete animation projects using special software. They not only save production time but also help in creating attention-grabbing animated projects. There is a lot of connection with puppetry here which can be called an early form of this type of animation.

Sand animation is a unique animation style that is used to create real shows as well as animated cartoons and films. Invented in 1969, the process can be a little more complicated than other kinds of animation. The process involves drawing with sand but is more like pouring sand onto a bright surface to create a 2D image. Along with live shows and films, the style is used in business for various storytelling and presentation purposes. Some popular sand animators include names like:

Whiteboard animation is a more recent form of animation compared to the above styles. It was found in the late 2000s and early 20s. It is best used for explainer videos where marketers want to show how a product or service works. It is primarily a video in which a hand with a pencil or pen draws something on the whiteboard while a voiceover explains each step. More and more marketers have moved on to more vivid and flexible motion graphics animation styles, which are more attractive and cost the same as whiteboard animation.

Some popular whiteboard types of animation examples include where Adobe explains their Echosign product in detail, PadMapper.com explaining how to find a new place to live without hassle, Ultracomm animation video, which takes the complex subject like payment card compliance and explains the technology is a most alluring way.

Clay animation is a highly creative and complex animation technique. It can lead to unique project results. In this method, the characters are first created from clay, and then animators film and record their movements on camera. Also called claymation, it is another type of stop motion animation.

Clay animation is often used by businesses for storytelling to sell children’s products.

Augmented Reality (AR) Animation is a more modern form that involves the use of animated objects to complement an AR experience. It’s widely used in game development, usually employing a combination of AR and 3D technologies.

In this article, we have provided an overview of different types of animation methods to help understand which style one can choose to move ahead in their career. They range from traditional animation to hi-tech AR-driven animation. As we have seen, there are numerous types of animation to choose from. But no matter which style you go with, animated videos are interesting and engaging ways to connect with viewers. One can use them to create memorable and impactful product demonstrations, presentations, explainer videos, and much more. Most online animation programs include experiential projects or internships where students can partner with professional animation studios or animators to learn first-hand how to create engaging and unique content. Different kinds of animation styles communicate different tones or various purposes. One of the most critical steps in the animation production process is choosing a style so that they can create that unforgettable content to share with the target audience.

Highly talented animators and artists create different kinds of props and objects that are used in a video. The amazingly realistic effect of stop motion animation makes it highly effective and appealing for both creators and viewers. They are often so effective that people may find it hard to differentiate between computer-generated visuals and physical reality. They not only make all illustrated videos interesting and unique but unforgettable and impactful as well.